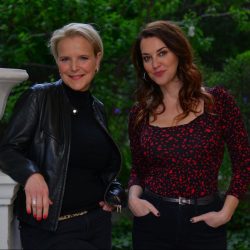 ESTHER TURAN is a founding member of Moviebar. As an SZFE (University of Film and Theatre) graduate with a background in directing, Esther is deeply involved in the creative process of all Moviebar projects. Her production experience ranges from American and European feature films and TV series to major TVCs and worldwide campaigns. She recently directed her fourth feature documentary BP Underground – Rock. Esther splits her time between Moviebar’s Los Angeles and Budapest offices serving as a bridge between American and European filmmakers.

VIKTORIA TREPPER became a producer after receiving her master’s degree in Economics and working on service as well as local productions as a production manager for over a decade. Besides focusing on producing and developing large-scale international TVCs, recently she also worked as the service producer for various TV series and feature fims. As a founding member of Moviebar, her goal is to realise remarkable works of art, while ensuring that the production side runs smoothly.