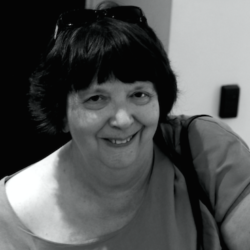 Carole has been at the forefront of the British sound industry for over 30 years, and, for the past 25 years, has spearheaded audio excellence at Grand Central Recording Studios (GCRS), which she founded, in Soho, in 1994, with business partner Ivor Taylor and leading sound designer Raja Sehgal.

Carole has produced and directed many award-winning radio commercials, working with many of the iconic creative talents in advertising and drama.

GCRS’ work has been nominated for, or won, every major creativity award in the world, including Lions, CLIOs, D&AD Yellow Pencils and Epicas. Two decades on, it is home to eight state of the art studios. In 2018 they launched GCVRS, a world leader in 3D Audio and a bespoke studio fully equipped for Dolby Atmos and Third Order Ambisonics. In its inaugural year GCVRS has collaborated on the exciting, award winning Samsung Moon experience.

If she did not have the best job in the world, leading the team at GCRS, she would love to be an investigative journalist or a barrister. She owes a debt of gratitude to Steely Dan’s Donald Fagen.