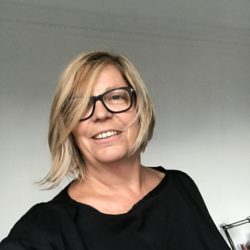 Following her Master’s Degree in English at the Sorbonne University, Sylvaine went to the US where she studied Cinema and Comparative Literature. On returning to Paris, she worked her way up as a PA, location scout and AD on feature films. Most notably for Tsui Hark and Maurice Pialat’s film “Under the Sun of Satan” which received a Palme d’Or in Cannes.

After freelancing on commercials for some of the leading companies of the time (PAC, Major), she went to emerging high fashion production company Première Heure. During her time there she worked with their prestigious photographers -Jean-Baptiste Mondino, Paolo Roversi, Peter Lindbergh, Javier Valhonrat- as AD and then line producer.
She became Executive producer in 1992, creating “Can”, her label within the PH holding, winning numerous awards along her 10-year-stay.

In 2002, she joined Les Télécréateurs working alongside the CEO in turning the company into one of the leaders in the industry in terms of creativity and awards. During her stay, Telecreateurs (now Insurrection) was elected Production Company of the year in 2003, 2004 and 2005 respectively, in doing so doubling the annual revenue.

She created the French branch of multi-award winning British company Stink in July 2007, building it up to be one of the big players on the French market. After selling her shares, she created FortLee with an array of promising young talents, promoting parity and eco-friendly approach to production.