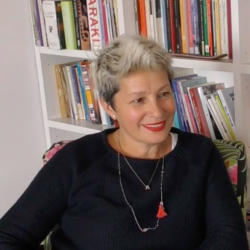 Owner and founder of The Antonella Perillo Agency (PR & SALES CONSUNTANCY) which is located in Barcelona, Spain.

In this role, Antonella is an Agent, Manager, Publicist, and Creative Consultant, as well as the Talent Scout for professionals in the  ﬁlm industry. She has been in the entertainment industry for over 25 years having started her career when marrying a member of the musical group Simply Red. She worked for several years as PA for the band.

Antonella works behind the scenes in securing partnerships with directors, producers, and negotiates contracts, jobs, and works with production companies on their behalf. She is the puppet master and has worked for over 20 years elevating the status of many very accomplished and now successful members of the entertainment industry.

Antonella is also a Founder partner in a Production Services Company based in Barcelona (Nouri Films SL). She has worked internationally as producer in Spain, France, Germany, Moscow, Middle East, India, Asia, America, Italy, USA, South America. Antonella also happens to be multilingual, speaking Italian, English, Spanish and French, and has worked on successful projects all over the world. And is a member of The A-D-A  in Europe (Association of The Directors Agents)